Twenty workshop participants gathered Saturday morning at Murrumburrah’s Old Court House to learn about the importance of connecting habitats for wildlife and to create artworks that reflect on the diversity of habitat ‘corridors’ and the wildlife using them. The Habitat Corridors project is coordinated by Southern Tablelands Arts in collaboration with the Department of Planning, Industry & Environment and textile artist Julie Ryder with financial support from Inspiring Australia.

The day started with an acknowledgement of the region’s traditional custodians, the Wiradjuri and Ngunnawal people, by Susan Conroy, the director of Southern Tablelands Arts, and was followed by a presentation by Dr Damon Oliver from the Department of Planning, Industry & Environment.

In his presentation Damon noted the complexity of the topic and explained how much planning and research is required “to get it right”. “It is all about scale – from the local to a national connectivity network,” according to the scientist.

Most of us envisage habitat corridors as rows of native trees surrounding paddocks, but habitat connectivity encompasses a whole range of other landscape features such as isolated paddock trees and patches of vegetation, dead trees, rocky outcrops or so-called inselbergs and even poles, fences and other artificial structures. Most importantly, different species utilise the landscape in their own way. The endangered brown tree creeper (Climacteris picumnus), for example, does not move more than 50m between trees for fear of being preyed upon. These behaviours need to be considered when designing habitat stepping stones.

Energised by a cuppa at morning tea, artist Julie Ryder presented her ideas for the group workshops and the resulting artworks, which will be exhibited at a public forum in Harden.  Julie suggested to highlight the symbiotic relationships between the local vegetation and its inhabitants by using native plants to eco-print watercolour papers cut into a variety of feather-shapes reflective of the need for birds to move through habitat corridors and patches. Julie also encouraged participants to think about creating other artworks on additional sheets of dyed paper to express their thoughts and ideas around endangered species and the local environment.

After Julie’s introduction the participants were keen to get their hands dirty and enthusiastically decorated sheets of soaked watercolour paper with beautifully arranged leaves of locally collected eucalypts, acacias and casuarinas. Lively chatter filled the room while Julie prepared the hot water baths for the dyeing process. Some papers were rolled up and placed in large pots, while smaller sheets were placed in baking trays and weighted down so that the plants could release their dyes into the paper.

After a lunch in the sun, workshop participants went onto cutting out different feather shapes from previously dyed paper, which will form the basis of the art installation for the forum. A strong scent of eucalyptus filled the air. And then it was time to unravel and uncover the dyed sheets of paper. Exposing the soaking papers one by one participants marvelled at the beautiful abstract patterns in shades of yellow, orange and brown that emerged once the leaves were removed. 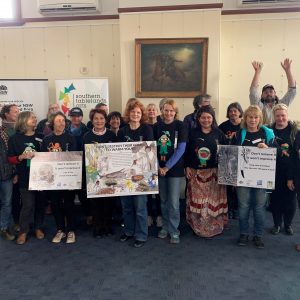 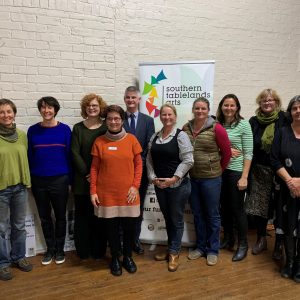 “A great concept that has been enjoyable but needs to maybe address outcomes rather than just the experience – change or action.”

“What a great way to bring members of the public together to share each other’s stories, to learn and laugh- to live! Thank you, I’ve thoroughly enjoyed myself!”

“The artworks were a wonderful visual testament to the wonder of our landscape. Very interesting. Thank you.”