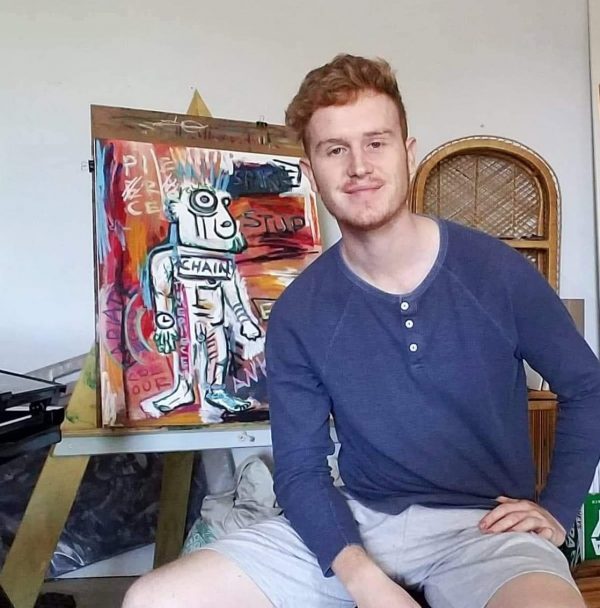 Jarrod comments in his artists statement that:

Adornment is commonly known as what we wear or what we take and appropriate to fit the body(this can be seen as how we mark the body or how we place objects on the body; such as jewellery and garments or ink. Individuals take what they can and se it as a symbol for wealth, culture or how an individual is above or a part of a grouping. In these works created by Jarrod Filmer a local artist practicing in Young.  Jarrod has found a lineage of these representations and conveyed how iconography is used in such a way that it is connected to personal wealth and image.

Referring to George Simmel in his essay “On Adornment (1908), the artworks investigate how jewellery is farther removed from the body, tattoos and markings being the closest, with clothing mingled somewhere between as it moulds to the body; all pertaining to how an individual expresses one’s self.

Though the exhibition has officially closed you can contact Jarrod for a private look. View more of his work on Instagram: @filmerart, @gallery78, or follow him @jarrodfilmer

“A collector of stories” is how this exciting, dynamic artist and former Young High School student, Jarrod Filmer describes himself. His first solo exhibition “Ice, Thread, Cuts” hosted by Gallery 78 in Young, not only reflects a bold and energetic talent but a fearlessness in his pursuit to expose the raw impact of these stories on the story teller and their audience.

Inspired by the writings of 19th Century sociologist and philosopher Georg Simmel, Jarrod uses pastels and acrylics to depict how individuals express themselves through the proximity of items of adornment on the body. Jewellery (ice) is the farthest removed from the body, tattoos and markings (cuts) are the closest and clothing (thread) – moulding to the body’s form – represents the space between the two.

The exhibition has been a success with some attendees stating they were “…blown away” by the intensity and maturity of the work.  As Joy Cornish, owner of Gallery 78 summed up: “I feel his work is dynamic and experimental whilst also having a maturity and clarity of idea rarely seen in such a young artist – I believe he is a rising star.”

But this exhibition reflects only part of the variety and depth of Jarrod’s artistic work.  In his major piece for his final year of his Bachelor of Creative Arts: Visual Arts & Design at the University of Wollongong, Jarrod created a triptych entitled; “Lest We Grow Old” which he describes as “a shrine to the happy memories of my childhood in Young.” Using pastels on board, Jarrod captures not only the positive light and colours of his memories but also a nostalgia – a hint of melancholy for those bygone days of carefree innocence.

Alongside designing artwork and logos for a few bands as well as creating illustrations for a short story released in 2020, Jarrod also created 7 pieces entitled “Demon” which explores the frightening experiences as told to him by a woman living with severe PTSD who sometimes “sees” what she calls a “demon” silently watching her. These powerful pieces are unflinching and confrontational and create a disturbing visceral response in the observer.

So where does Jarrod see his artistic journey taking him – what would be his dream job? His response, though unexpected, wasn’t surprising considering his passion for gritty reality. “I’d love to be a war artist. I want to capture the lives of ordinary people living in and around war zones; how they cope and survive in such brutal places.”

With his love of storytelling, his deep empathy for people and a passion to capture and express the realities and vagaries of life, whether in a war zone or the sunlit streets of his childhood, whatever Jarrod creates one thing is certain, it will be exciting, powerful and meaningful, marking him out as an artist to watch and follow now and into the future.

We are also featuring Roz Hall Farlam who is a local freelance writer and has written extensively for magazines and newspapers. Roz has a particular focus on performance writing. Look out for her own stories from the studio feature coming up soon. You can check out Roz at @rozhallfarlam or contact Roz via email.