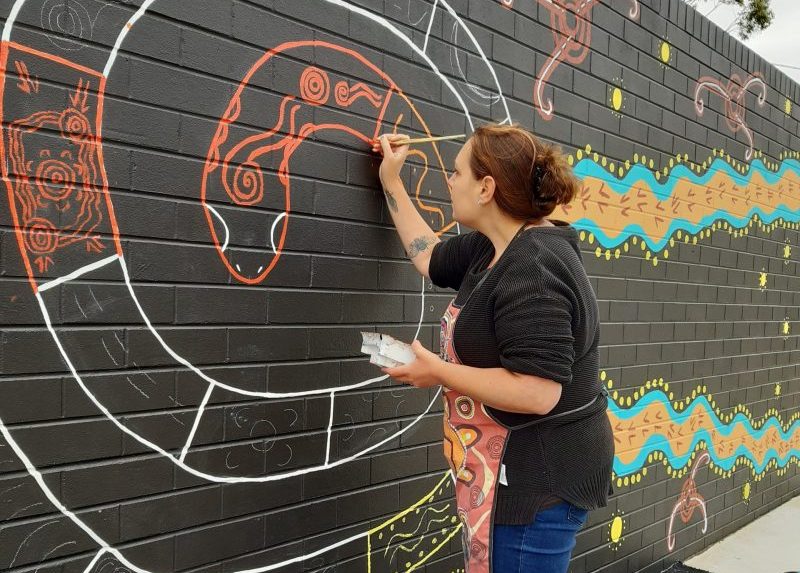 This Week STA caught up with Indigenous Artist Monica Bridge to chat about the deep meaning behind the Goulburn North Public School Mural. The Mural was designed and inspired by Indigenous cultural practice in the region and developed by Monica using the artworks of the students.  The Students then helped to create the mural.

I am a proud Muruwari woman and Contemporary Aboriginal Artist, with a strong connection to my culture and family. I have always had a passion for visual arts, particularly painting, drawing and sculpture. For many years creating art has been my own personal tool for self expression, healing and understanding. I explore with different shapes, lines and symbols in my artworks, influenced by my interest in traditional Aboriginal symbols.

I am passionate about sharing my culture  and increasing awareness about Aboriginal culture, history and perspectives through creative practice. And have conducted several arts and culture workshops in preschools, primary schools, high schools and with community groups, with this focus. 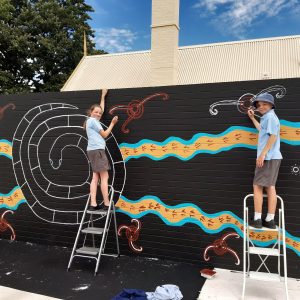 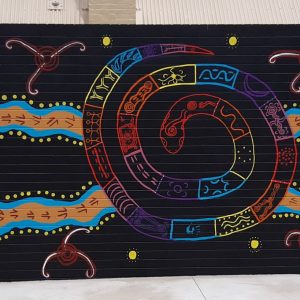 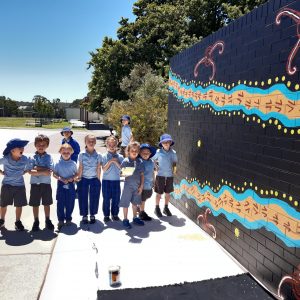 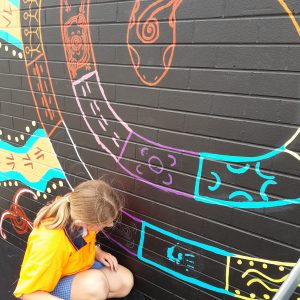 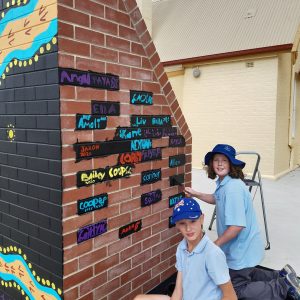 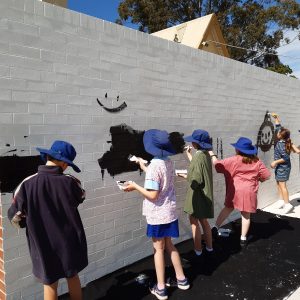 The Mural ‘Rainbow Serpent’ is a representation of how the students at Goulburn North Public School are connected to country and Aboriginal culture.
Workshops were conducted by Monica Bridge, giving students an introduction into traditional and contemporary Aboriginal art and the use of symbols in artworks. All students created their own design ideas for the mural. Four designs from each class were chosen to be used in the final artwork. Monica combined elements from each of these designs to create the final design for the mural. Some of the symbols used in this artwork have been created by the students and are inspired by traditional Aboriginal symbols. Each of the designs incorporated into this artwork has its own unique meaning and story. There was a common theme among the artworks, of ‘Respect for Aboriginal culture, we all matter, working together, caring for each other, the importance of the land, waterways and animals in our Country.’

The Rainbow Serpent pictured in the artwork represents the Dreaming and the creation of landmarks and waterways across Australia. The symbols within the Rainbow Serpent echo the theme of the student’s artworks, ‘working together, caring for the land and the animals, respecting country and culture.’

Four tracks are depicted in this painting, leading out from the Rainbow Serpent. The symbol for kangaroo tracks is in the centre, representing the kangaroo’s that are often seen in this area (Goulburn). The kangaroo tracks are in red ochre colour, red ochre and yellow ochre were traditionally used by Aboriginal people in this area. The yellow ochre colour is used in the background of these tracks representing the land. Light blue wavy lines run along the sides of the four tracks, symbolising freshwater country and the waterways in and surrounding Goulburn, including; the Wollondilly, Mulwaree, Shoalhaven and Lachlan rivers. Bright yellow circles on the outside of the rivers represent people in this community, coming together and working together.

Traditionally the rivers in and surrounding Goulburn were a place for Aboriginal people to find food and fresh water. Here they would camp, tell stories, fish, hunt and use native trees and plants for tools, weaving, medicine and food. The rivers in Goulburn continue to be a place of importance within our community, where people can gather, for celebrations, community events, fishing, swimming and Canoeing. The red ochre symbol with three circles and curved lines coming out from the circle, was designed by a student and represents a meeting place. Goulburn was traditionally a meeting place for many different Aboriginal groups to come together, and it continues to be a place where Aboriginal people from different areas and non Aboriginal people of various heritages, gather and celebrate culture.

The repetition of this symbol shows the continuation of people coming together to celebrate, it symbolises the gatherings that have taken place in this area many years ago, those that are happening today and those to come. The curved lines coming out from the three circles are shaped to replicate a Boomerang being thrown, as some Boomerangs when thrown will return to where they started. This amplifies the meaning behind this symbol, people continuing to meet and talk, leaving and going their own way but coming back to meet again. This is the building of relationships in the community and working together. White is used in the centre of the curved lines, representing white ochre which was also traditional used by Aboriginal people in this area. The background is black representing the night sky. Bright yellow circles with smaller circles around them, symbolise the stars. As Aboriginal people believe the dreaming is also represented in the stars and that what is seen in the night sky is a portrayal of what is seen on country. The Southern Cross is depicted as a representation of our location in relation to the stars.