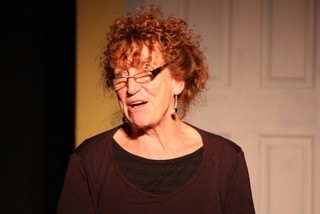 Tonight we share a very special Christmas Day Stories from the Studio with Annie Bilton. The playwright, director and actor has had locations as diverse as Michigan and Moscow for her playground, but STA visited her while deep in a major new project closer to home in Bungonia.

It all started with a historian friend in Bungonia telling me about the Balcombe family.

Friends with Napoleon on St Helena, they ended up in Australia, owning land in Bungonia.  Daughter Betsy’s life was true drama – and I was hooked. What was it like for a talented, dynamic, outspoken women in the 1820s, when she was a deserted wife?  The more I researched, the more my outrage grew – at the laws of land, church and society that suffocated and tried to silence her.  I couldn’t bear to write her story if she’d just faded into oblivion – but not Betsy!

So “The Interesting Mrs Abell” grew into a full-length play, and with it grew local interest in this slice of our Colonial history, particularly women’s history.  Now Mrs Abell is preparing to go on stage at Goulburn’s Lieder Theatre in April, with satellite history-based seminars in Bungonia and Marulan.

from the Country Arts Support Program, they’ll get it.  As part of the PLAYING OUR HISTORY Project, regional women’s stories through generations will be collected in SURVIVAL: HERSTORY – a Weekend Workshop (supported by Crookwell CWA), which will record stories for future generations and also attach them to the play’s production.

Find out more about the SURVIVAL: HERSTORY – a Weekend Workshop.

Featured image above – Annie in directing mode: A stuffed suitcase of experience in Australia and overseas, with plays from farce to Shakespeare – even a Blues musical in Detroit – the home of Blues. 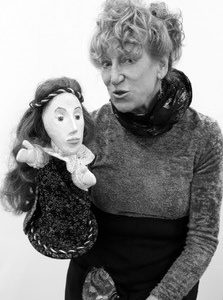 Annie in acting mode: rehearsing for the role of Elizabeth I in her own play “Elizabeth and Grace”, with her confidante, the young Eliza (created with the help of Sue & Steve, master puppeteers of Southern Highlands (ImaginArta) Taking a break from writing to get the festive dinner ready for the 25th. Nice to see young Eliza still helping out. 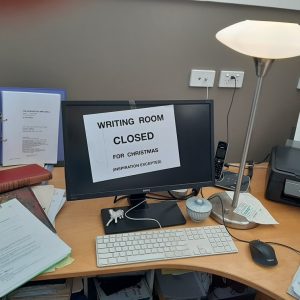 The writing room is temporarily closed while Annie takes a summer break.