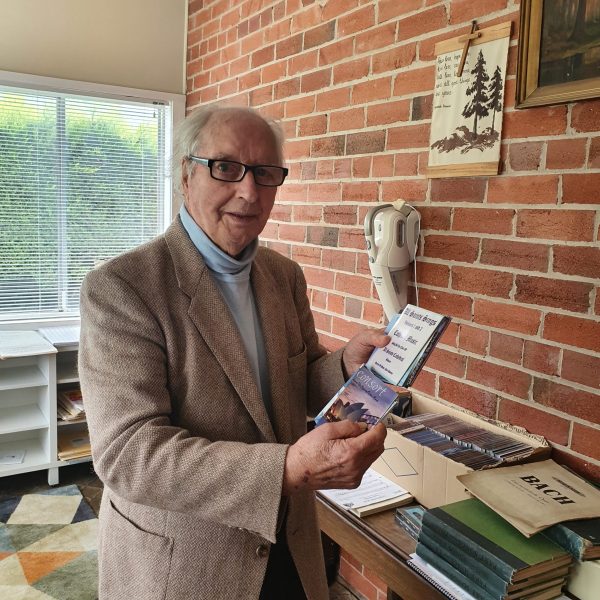 Southern Tablelands Arts were willing accomplices when Paul Paviour played a flash concert inside a local café that just happens to boast a grand piano.

Paul played a range of favourites to those lucky enough to stop in for a coffee and those that looked in online over STA Instagram TV.

Paul Paviour OAM FRCO (born 1931) is an internationally acknowledged composer, organist and conductor based in Goulburn. He has made a significant contribution to music having adapted at least 471 works in 639 publications.

Last year Paul held a choir symposium in Goulburn attended by choir leaders from across the region. He also accompanied Maisie’s Choir and performed at the STA combined choir concert in Yass last year.

Not content to rest on his laurels Paul is busy creating arrangements that include music for beginners to play along. Making the experience of playing with a large orchestra accessible to new musicians and students. It is a project that continues Paul’s emphasis on sharing music and access to musical education that has been a focus throughout this career.

Paul’s Wikipedia page has all the details

We have saved the special encore part of the recent flash mob performance to premier for Stories from the Studio.

CD Giveaway – Paul has generously supplied STA with a selection of his recorded works on CD. Be one of the first 5 people who direct message us on Instagram or Facebook with a postal address and receive a gift pack in the post – just in time for Christmas.

Huge thanks to Julian at One TwentyNine Café in Oaks Estate for being a willing accomplice to the flash concert and for making a darn fine cup of coffee.